In Memory of Angmar

Angmar was the gamemaster and organizer of the Second Darkness roleplaying game and creative writing venture. From 2004 through 2005, a small group of friends gathered in various chatrooms in "The Palace" graphical chat program to engage in written roleplay based upon prompts and scenarios created by Angmar. The premise of Second Darkness was the ultimate "what if" scenario for fans of J. R. R. Tolkien's work - what if Sauron won the War of the Ring?

Angmar originally created this site as a place to archive chat logs so that the players of Second Darkness would always be able to have access to them. As time went on, Angmar expanded the site, adding the Black Speech Library, a section dedicated to fan-created Black Speech dialects. While Tolkien only created a few words in Black Speech, gaming companies such as Iron Crown Enterprises devised their own versions of Mordor's language for roleplaying games, and many fans have created their own Black Speech dialects as well. Being a huge fan of the Nazgûl, Angmar also added the Nazgûl Research Room, a collection of quotes and research articles about the Nazgûl, as well as a list of fanfiction stories featuring the Nine as prominent characters.

After Second Darkness ended in June of 2005, Angmar continued to write with Elfhild, expanding upon a campaign from Second Darkness which the pair had been working on since the previous November. Angmar and Elfhild decided to rework this roleplaying campaign, which had been given the working title of "The Circles," into a fanfiction series that could be posted on the now defunct Tolkien fanfiction archive, Hennth Annûn, as well as other archives.

Since it was originally meant to be part of Second Darkness, The Circles shares many of the same basic concepts: the Witch-king survives the Battle of Pelennor, and Sauron regains the One Ring. "The Circles" explores what life might have been like in a darker version of J. R. R. Tolkien's beloved tale. The story follows a cast of original characters, as well as canon characters such as the Nazgûl and Sauron.

On June 27, 2020, Angmar passed beyond the Circles of the World after a lengthy illness. He and Elfhild wrote continuously for almost fifteen years until Angmar's health started to decline dramatically, and he was forced to take a hiatus from writing. Over the years, the writing team wrote eleven books, but less than half of them were posted online at the time of Angmar's death.

It was one of Angmar's last requests that Elfhild finish The Circles. Though Angmar has departed from this world, his memory will live on through his writing.

Day is ended, dim my eyes,
but journey long before me lies.
Farewell, friends! I hear the call.
The ship's beside the stony wall.
Foam is white and waves are grey;
beyond the sunset leads my way.
Foam is salt, the wind is free;
I hear the rising of the Sea.

Farewell, friends! The sails are set,
the wind is east, the moorings fret.
Shadows long before me lie,
beneath the ever-bending sky,
but islands lie behind the Sun
that I shall raise ere all is done;
lands there are to west of West,
where night is quiet and sleep is rest.

Guided by the Lonely Star,
beyond the utmost harbour-bar
I'll find the havens fair and free,
and beaches of the Starlit Sea.
Ship, my ship! I seek the West,
and fields and mountains ever blest.
Farewell to Middle-earth at last.
I see the Star above my mast!

Hear a beautiful rendition of this poem by Clamavi De Profundis. 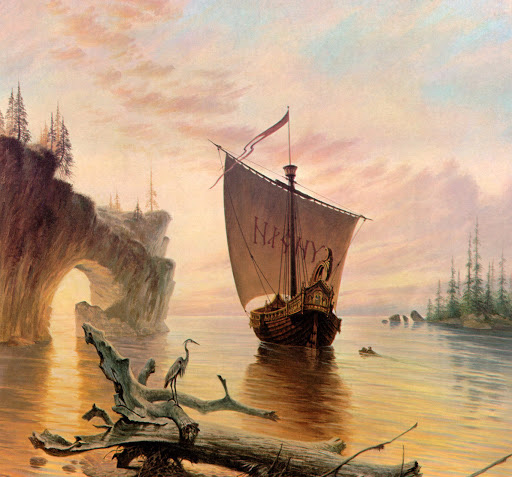 Return to the Library of Minas Morgul